Three county seniors who have dedicated themselves to helping others took a bow at Queen's Park last week.

Woodrow Blakely of Picton, and George and Bessie Teskey of Wellington were among 21 recipients of Ontario Senior Achievement awards presented on June 28 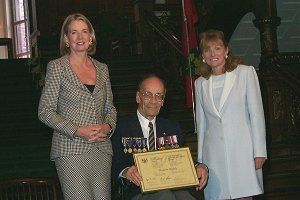 Ontario's lieutenant -governor, Hon. Hilary Weston, presented the awards in the lobby of the Ontario Legislature, marking the culmination of Seniors' Month.

The recipients, nominated by their own communities from all over the province, are seniors deemed to have contributed exceptional voluntary or professional achievements in a broad range of fields.

For Blakely, that contribution has run throughout his life since, as a veteran in 1945, he began to volunteer his time and energy to Picton=s Royal Canadian Legion Branch 78, and apply his speaking talents to helping young people understand the significance of war.

George and Bessie Teskey's contribution has ranged from helping out young offenders who might otherwise have fallen through the cracks of the justice system to a 15-year-long humanitarian aid program feeding and teaching skills to the poor in El Salvador.

Blakely attended the ceremony last week in a wheelchair, having suffered a stroke of the spine in April.

Rev. Stan Whitehouse, past president of Prince Edward Community Care for Seniors, the organization that put Blakely's name forward, recalled that despite Blakely=s recent stroke and the fact that he was undergoing rehabilitation at St. Mary's of the Lake hospital in Kingston, Blakely honored a speaking engagement shortly afterwards in Bloomfield. The event was a thanksgiving service by the Dutch people in the county marking the 55th anniversary of the liberation of Holland by Canadian troops. "Needless to say, " Whitehouse says, "his listeners were much moved and greatly impressed."

Blakely's work in his Picton community began shortly after he returned as a veteran from World War II. Although disabled by a shrapnel wound that left him with a leg disability, he became involved with the local branch of the Royal Canadian Legion, and was the driving force in the restoration of a historic home in Picton, the McMullen House, acquired by the Legion in 1948. Through 26 years of service on the Legion executive, including six terms as president, Blakely shepherded the exterior and interior restoration of the old home to its present historically accurate grandeur.

His determination to see a job done, and done right, was evidenced in the restoration of Picton United Church tower, which by 1996 showed definite signs of distress. As a devoted churchgoer, Blakely vowed to campaign for the required $250,000 needed to do the work. He began by writing a cheque for $1,000 to get the ball rolling, then wrote an article in the Picton Gazette detailing the need for funds. His appeal was answered by local and expatriate county residents. The tower was restored and the bell rings again, thanks to the determination and dedication of the man described by Rev. Edward Horton, the present padre of Picton United Church, as "a man whose endeavors since his return from the war have been motivated by the desire to live his life in gratitude to those who died...."

Blakely's contributions don=t end there, however. Besides teaching English and history at Prince Edward Collegiate for 21 years, and raising five children with his wife Virginia, Blakely has overseen every Legion parade, service and special ceremony for 20 years.

He also organized local essay, poster and public speaking competitions sponsored nationally by the Legion, emphasizing the historical significance of World War II and its contribution to the cause of freedom and peace.

In the 1980s Blakely served on the board of directors of Prince Edward Community Care for Seniors.

George and Bessie Teskey retired in 1985 but have spent those 15 years helping the less fortunate in El Salvador. They have provided breakfast for the homeless and hungry, taught language and craft skills, and provided food, and medical supplies in increasing quantities each year, as word of their humanitarian efforts spread across Canada.

United Church members (George is an ordained United Church minister) from New Brunswick to Prince Edward County have donated clothing, toys and supplies. What was originally the Teskeys' annual van load of goods turned into a transport container load in 1995. Although the Teskeys' health no longer permits them to make the trip, in April of this year a planeload of supplies went to El Salvador, with the assistance of the Department of National Defence.

But long before their retirement years, the Teskeys began offering assistance to people who were in difficulty with the legal system. And long before there were halfway houses or the Young Offenders Act, the Teskeys provided support to young offenders and parolees. In fact, they were offered positions as parole officers, but declined, preferring their volunteer roles.

Parents of five children, and now in their 80s, the Teskeys still ride together on their motorcycle. They are active in the Wellington United Church , Bessie with the women=s organization, George with the men's. George also serves as a voluntary associate minister.

Photos supplied by Ministry of Citizenship, Culture and Recreation